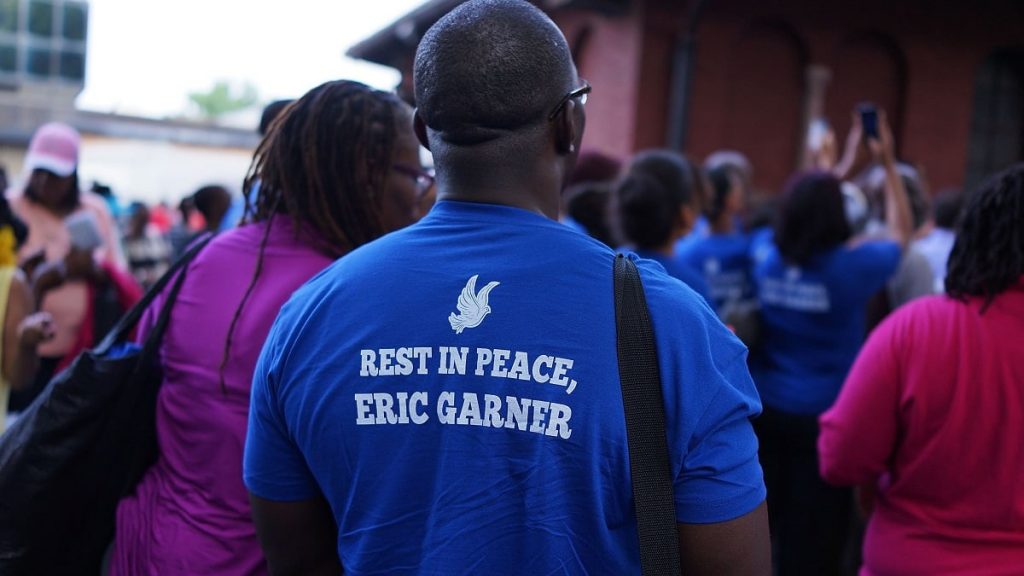 Zechariah 7:9: “Thus speaketh the Lord of hosts, saying, Execute true judgment, and shew mercy and compassions every man to his brother.”

On July 16, 2019, U.S. Attorney Richard P. Donoghue announced that the Department of Justice would not pursue criminal charges in connection with the death of Eric Garner.

Mr. Garner, a 43-year-old husband with six children, died on July 17, 2014 in Staten Island after being arrested for selling loose cigarettes. Following an argument with police officers, Mr. Garner—who was very large, but unarmed—resisted arrest. New York Police Department Officer Daniel Pantaleo and other officers then wrestled him to the ground. Video footage of the arrest shows that Officer Pantaleo placed Mr. Garner in a chokehold while subduing him. (The use of chokeholds is against New York Police Department rules.) After he was wrestled to the ground, Mr. Garner repeatedly said, “I can’t breathe.” Once he was handcuffed, Mr. Garner was left lying on the ground for several minutes. A police sergeant called an ambulance and said that Mr. Garner was having trouble breathing, but reportedly added that he “‘did not appear to be in great distress.’” When EMS personnel arrived, they did not place Mr. Garner on oxygen before carrying him into an ambulance. Mr. Garner died of a heart attack in the ambulance. The medical examiner listed the cause of death as “‘compression of neck (choke hold), compression of chest and prone positioning during physical restraint by police.’” Mr. Garner’s “acute and chronic bronchial asthma, obesity and hypertensive cardiovascular disease were listed as contributing conditions.”

Eric Garner’s death quickly became national news, adding to existing tension between African-Americans and law enforcement. Officer Pantaleo was stripped of his badge and firearm and placed on desk duty, where he has remained since Mr. Garner’s death. Four EMS personnel who were at the scene were suspended without pay. On December 3, 2014, a Staten Island grand jury declined to indict Officer Pantaleo in connection with Mr. Garner’s death; this decision led to widespread protests and calls for greater transparency regarding grand jury proceedings.

U.S. Attorney Donoghue acknowledged that Officer Pantaleo “tried to subdue Garner with two approved NYPD techniques, but ended up putting Garner in a chokehold for seven seconds as they fell.” However, U.S. Attorney Donoghue added, “When we evaluated Officer Pantaleo’s actions in light of (1) his training and experience, (2) Mr. Garner’s size, weight and actions to resist arrest, and (3) the duration and escalating nature of their interaction, we determined that there was insufficient evidence to prove beyond a reasonable doubt that Pantaleo acted in willful violation of the law.” At New Yorker’s Family Research Foundation, we agree that a federal civil rights case against Officer Pantaleo would have been unlikely to result in a conviction; however, it is unacceptable that the Department took five years to decide whether to bring charges.

UPDATE: On August 2, 2019, the administrative judge recommended that Officer Pantaleo be terminated from the NYPD.

The death of Eric Garner was tragic and unnecessary. There is plenty of blame to go around: Blame on Mr. Garner for selling loose cigarettes. Blame on Mr. Garner for resisting arrest. Blame on Officer Pantaleo for using a banned chokehold. Blame on Officer Pantaleo and his fellow officers for failing to deal with Mr. Garner’s respiratory distress with the appropriate level of urgency. Blame on emergency medical personnel for failing to provide prompt and effective care. Blame on the Department of Justice for dragging its feet for several years in investigating the matter. And blame on Mayor de Blasio and the New York Police Department for waiting until 2019 to initiate administrative proceedings against Officer Pantaleo. While New Yorker’s Family Research Foundation recognizes the challenging situation Officer Pantaleo faced when apprehending a man much larger than himself, the following facts remain: Mr. Garner was unarmed, Office Pantaleo used a chokehold to subdue him, the chokehold violated Police Department rules, and the chokehold and ensuing takedown led to Mr. Garner’s death.

Police officers do a dangerous and difficult job, and their contributions to our society should be treated with respect. However, given the high level of authority that they possess, officers’ actions are held to a correspondingly high standard—a standard that does not appear to have been met in this situation.