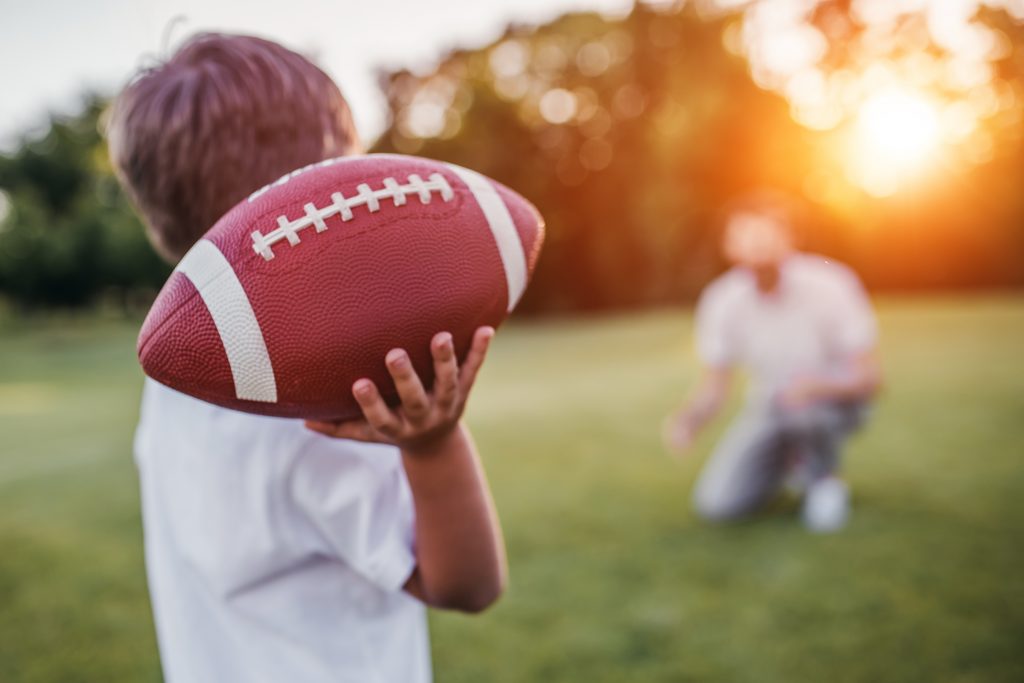 Proverbs 22:6: “Train up a child in the way he should go, and when he is old he will not depart from it.”

It’s September, and football season is upon us! Chances are that you or a football fan you know is geared up for the season. Whether they plan to watch college football or the NFL, football fans have begun to pull out their neatly laundered jerseys, check their ESPN apps for game times, and gather friends to cheer on their teams.

At the Center for Childhood Innocence, we invite parents to be their children’s biggest fans.

Let us explain what we mean. When it comes to their children’s sexuality and gender identity, some parents are finding out just how much the game has changed since they were kids. In 21st-century America, left-wing institutions—entertainment, media outlets, public schools, and Planned Parenthood, to name a few—present America’s young people with damaging lies. What damaging lies, you ask? Here are a few:

These damaging lies are symptomatic of a larger worldview that leaves God entirely out of the equation. If there is no God and if we are just here by chance, I get to decide who I am—and I can be whoever I want to be. It’s all about me.

When young people embrace damaging lies, the wreckage is real. That wreckage can include abortion, sexually transmitted disease, medical problems arising from so-called “sex reassignment” procedures, and breakdown in family relationships. Parents are left asking, “How did this happen?” and “What can I do about it?”

How can parents protect their children and teens from damaging lies? How can families thrive in such chaotic times? Here are some helpful suggestions for Christian parents. First, dialogue with your kids about sexuality and gender identity. If you won’t, someone else will. The abortion industry would like nothing better than to be your child’s resource for information about sex and reproduction. Also, activists promoting gender confusion may take on the role of “cheerleader,” offering to be a child’s “glitter family” as a way to replace parents that are “unaffirming.” In a recent webinar, we interviewed Dr. Erin Brewer about practical ways for parents to develop healthy relationships with their children. We encourage parents to watch that interview and to give Dr. Brewer’s suggestions careful consideration. Young people whose relationships with their parents are characterized by honest, authentic communication are well-equipped to avoid being influenced by damaging lies.

Second, ensure that others respect your authority as a parent. Adolf Hitler, Mao Zedong, and Alfred Kinsey knew that children were the mechanism for changing the future. For that very reason, some view loving parents as a barrier to the political and social reforms they wish to promote. For example, former Planned Parenthood educator Monica Cline explains that Planned Parenthood views parents as an obstacle to their efforts to push birth control and abortion on young people. Please be on guard against those who would use your children to promote their agendas.

Third, please be vigilant about what your son or daughter is reading, viewing, and learning. Many public school health curricula encourage children to be sexually autonomous by teaching them how to access services without their parents’ knowledge or permission. Does your child’s school offer a health class? Do you know what subjects are covered in that class? Are outside speakers are brought into the class and given access to your kids? What books are your children reading in English class? Do they address age-inappropriate topics? What internet websites does your child view? What videos does he watch? Do you dialogue about these matters with your children on a regular basis?

Fourth, nurture your child’s faith. Don’t just talk about living a Christian life—model it. Teach your children to read the Scripture and pray. Help them to cultivate their own relationship with the risen Christ. Ultimately, that relationship will help them to know the truth and to recognize damaging lies to which they may be exposed in our fallen, worldly culture.

A recent study by the Barna Group showed that kids and young adults in Generation Z are eager for real interactions with parents and others who are older than they are. However, some young people believe that their parents are too busy to cultivate deep relationships with them. Sadly, it is all too easy for well-meaning Christian parents to outsource their children’s education to schools and delegate their children’s spiritual development to churches. As we gear up to cheer on our favorite football teams this fall, let’s redirect some of that fan energy to our kids. By engaging kids on a deep level and having real conversations with them about tough issues, parents can help to protect their hearts and minds from damaging lies.