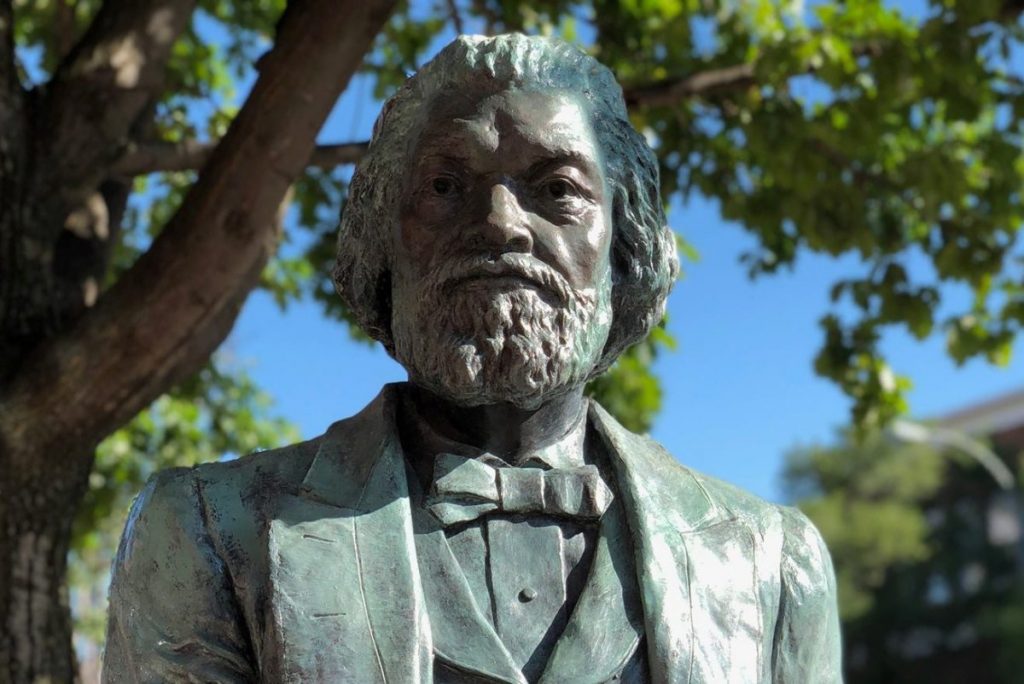 Sometime during the night of July 4th, cowards committed a heinous crime. They destroyed a Maplewood Park piece of American history and a memorial to one of Rochester, New York’s greatest men, abolitionist Frederick Douglass.

Though we may never know for certain, perhaps those who destroyed this monument wanted to erase the reverence and respect Douglass had for the Founding Fathers and the framers of the Constitution. In his 1852 “What to the Slave Is the Fourth of July?” address delivered in Rochester, Douglass declared that that a country founded on such unique freedoms as ours must not practice the hypocrisy of slavery. Douglass recognized the greatness of America and this reality drove him to call out the inconsistency of a people that proclaim liberty for all while practicing slavery for some. In that July address, Douglass said:

“Fellow Citizens, I am not wanting in respect for the fathers of this republic. The signers of the Declaration of Independence were brave men. They were great men, too great enough to give frame to a great age. It does not often happen to a nation to raise, at one time, such a number of truly great men. The point from which I am compelled to view them is not, certainly, the most favorable; and yet I cannot contemplate their great deeds with less than admiration. They were statesmen, patriots and heroes, and for the good they did, and the principles they contended for, I will unite with you to honor their memory.”

“Allow me to say, in conclusion, notwithstanding the dark picture I have this day presented, of the state of the nation, I do not despair of this country. There are forces in operation which must inevitably work the downfall of slavery. ‘The arm of the Lord is not shortened,’ and the doom of slavery is certain. I, therefore, leave off where I began, with hope. While drawing encouragement from ‘the Declaration of Independence,’ the great principles it contains, and the genius of American Institutions, my spirit is also cheered by the obvious tendencies of the age.”

Douglass knew that our nation like all others is imperfect and admittedly, it always has been. Yet, throughout our history there have been those like Douglass, Susan B. Anthony and Dr. Martin Luther King, Jr. that arise in key moments of America’s maturing and call us to a better way. This is why Katherine Lee Bates in her “America, the Beautiful” penned her reverential plea, “America! America! God mend thine every flaw.”

We are often asked as conservatives, “What are we trying to conserve?” The answer is simple. We seek to preserve a nation, founded on the idea of Natural Law and of Nature’s God “that all men are created equal, that they are endowed by their Creator with certain unalienable Rights, [and] that among these are Life, Liberty and the pursuit of Happiness.” We work to conserve a way of life where our children will learn from American history, not topple, cancel or erase it. We want to conserve our national history so that each succeeding generation of Americans can build upon those who came before them and preserve equality, liberty and justice for theirs and future generations.

Western Civilization stands on the shoulders of giants like Douglass who awoke a country’s conscience and shaped its history, but today, some actively work to destroy this nation and her ideals. These would prefer the slavery of the mind and the tyranny of the mob to the right of free speech and the rule of law. Those who love this country cannot remain silent when the cancel culture—whatever its motivation—comes to claim our national history. America needs more like Frederick Douglass who will speak with both courage and conviction. Our nation desperately needs moral leaders who will stir freedom in our souls, while calling out the inconsistencies still evident in our society. Douglass’ work is not yet complete. This generation’s moral leaders will gain strength and be emboldened by the actions of those like Douglass, who came before them, but to do so they must first learn of him.

Jason J. McGuire is the serves as the president of New Yorker’s Family Research Foundation. Reid Robbins is the principal of East Palmyra Christian School.